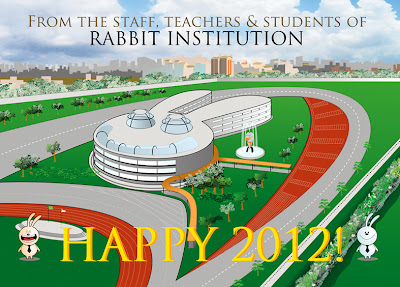 2011 has been an incredible year for Sir Fong, Totto and everyone at Rabbit Institution!

1. 2 prints of Sir Fong sold out and reprinted!
2. Both our featured scientists, Prof Lui Pao Chuen and Prof Leo Tan,
became Singapore Science Fellows. This title recognizes them as top scientists
in Singapore!
3. Book 3's story of dog flu became a reality in Australia, where the first-ever documented
case of a virus jumping from a horse to a dog occurred. Sadly, the dog had to be put down
to prevent the virus from spreading.
4. We used the joke phrase "iSad" in Book 3, and it became popular when
Steve Jobs, founder of Apple and the face of iPhone and iPod, passed away.
5. We made a new one-day sales record in a school this year!

2012 is the Year of the Dragon, and we have to say goodbye to the Year of
the Rabbit. But we're all looking forward to the new year, because
happiness from the Rabbit year will continue and get expanded
in the Year of the Giant Fire-breathing Lizard!

Yay! Happy New Year to all of you!

(The Rabbit Institution campus is designed by the incredible, always-awesome
Dengcoy Miel. He has won many international comics award, and also
does amazing editorial cartoons in The Straits Times and other
international newspapers!)
Posted by otto fong at 8:55 PM No comments: