For my "Sir Fong's Adventures In Science" friends, here's something else you don't know about me! 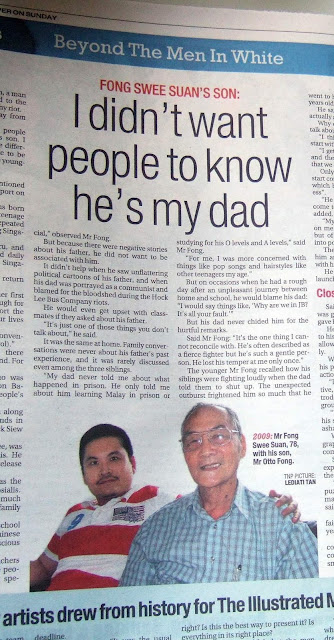 If you didn't Google "Fong Swee Suan" after reading my last blog, here's one more opportunity to find out: he is now a character in a new graphic novel (aka, comic book) called The Illustrated Men In White. This book is a illustrated version of the recent best-seller of the same title (below): 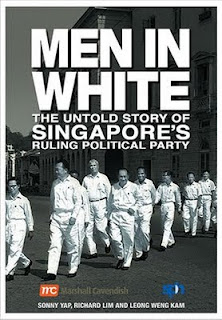 When New Paper reporter Lediati Tan interviewed my father and myself on 22nd Nov (Sunday), she showed us a copy of the upcoming graphic novel. I was thrilled!

You see, when I was growing up, I only saw my dad portrayed as some vicious, angry villian (see two examples below): 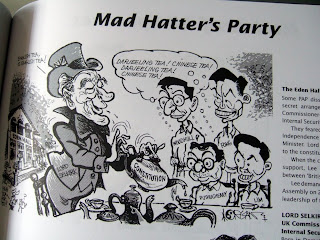 This image is taken from the excellent Morgan Chua's My Singapore, published by Marshall Cavendish. My dad is top right. 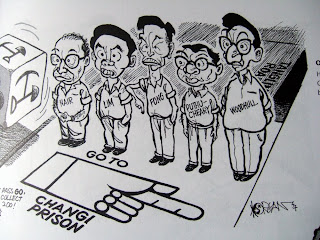 This image also taken from Morgan Chua's same book - my dad is in the middle.


You can imagine how bruising it was for a son to see something like that about dad (kind of like Luke Skywalker finding out that his dad is the galaxy's super villain Darth Vader - "NOOOOOOOOOOOOOOOO!"). 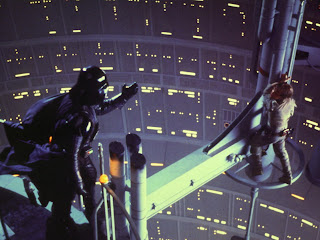 Now, I saw artists Kelvin Chan, Chng Choon Hiong, Jonathan Roberts and Celesto Gulapa's portrayal of dad differently (Ng Tze Yong is the writer of the graphic novel). Well, he's still somewhat fierce-looking in some scenes, but it's pretty cool. I thank them!

So if you pass by the grocery store downstairs, buy a copy of The New Paper (22nd Nov/Sun). Or go get The Illustrated Men In White! 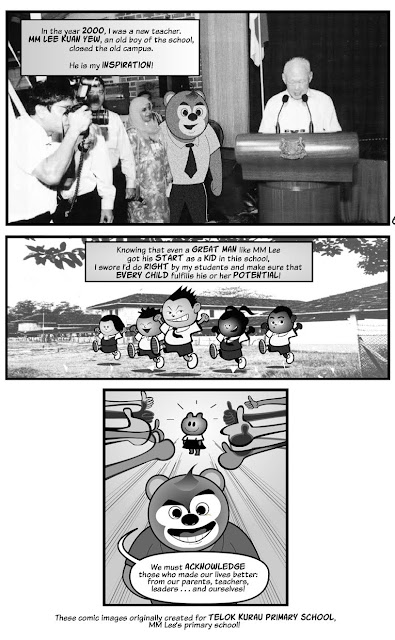 A friend of mine on Facebook said this of MM Lee Kuan Yew:


Chor Pharn Lee: "Seems like LKY's sense of mortality, and the urgency to wrap up loose ends is accelerating. Closure through Men in White, hectoring the USA to stay its course while receiving some award, now public atonement for killing the Chinese language in Singapore. In balance, he has done more good. Like how they sum up Mao's achievements as one third bad, two thirds good. I think I'll be more generous."

Here's the link on MM Lee about his education policy:

Personally, I have had my own prejudices about MM Lee. Afterall, my father is Fong Swee Suan (google him, or "Hock Lee Bus Riots"), one of the main opposition leaders during the early days of PAP.


But I am also a product of MM Lee's Singapore. I had a great bilingual education (it's not perfect, but it's still great!). I benefited from growing up in a multi-racial, multi-lingual country. I can live my life without fear of racial or religious prosecutions, or being shot down in the streets, or in fear of the triads.

So, to MM Lee, THANK YOU! You're a great man! I love you as I love my father!

Here's an old song about giving credit - for those of us who didn't get it when we first heard it:

Discovering Water On the Moon: Who Deserves the Credit?

This week, online headlines screams: "Tons of Water On the Moon!" (To be accurate, 25 gallons were discovered.)

The implications are incredibly exciting, just as exciting as when the first human being - an American - left his footprints on the moon. Suddenly, everything was possible . . . for Americans, at least. 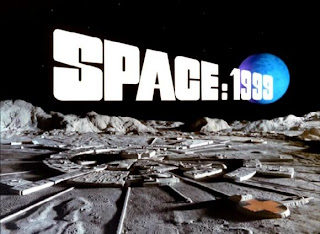 When I was young, a popular television series called "Space: 1999" depicted a moon base, where humans work and live. For my last birthday, my partner bought me a die-cast metallic model of the Space: 1999 ship - that's how dear the series was to me.

Now, the discovery of water on the moon is re-igniting our possibilities for the Moon - water implies that we can sustain life! 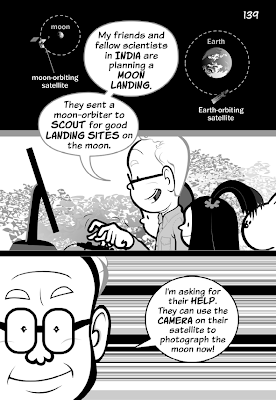 However, most news on the discovery of water credited NASA, and neglected to mention that it was India's first mission Chandrayaan-1* that carried the equipment which discovered the water in the first place.

It is a little tricky at the moment: while the moon probe belonged to India, the equipment that detected water belonged to NASA. Regardless of the final verdict on who found water on the Moon, I hope young people all over the world are inspired by the possibilities - not just for human kind, but for yourselves as great scientists.

Can an Indian, Chinese, Malay or Thai be great scientists? Why not? 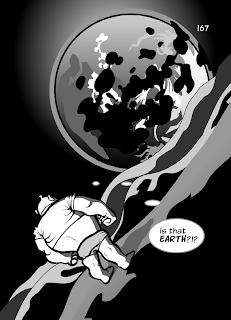 * In Sir Fong's Adventures . . . Book 2, I faced a problem while plotting the story: "How can an Earth satellite take clear pictures of the Moon surface?" I posed that question to Professor Lui Pao Chuen (the ex-Chief Defense Scientist who is featured in the book as Professor Thunder). He gamely suggested that a moon satellite can take clear pictures. And in fact such a venture was undertaken by Indian space scientists.

And wah lah! The rest is comic book history!

Rabbit Institution and How Sir Fong looks on your furnitures! 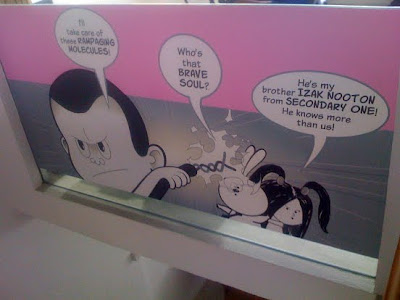 Ever wondered how a simple drawing of a simple comic artist ends up being plastered all over the world, on mugs, calenders, toys, bed sheets and other merchandise? My family have been ultra-supportive the last two years as Totto and his friends (mainly Izak Nooton and Abby Nooton) were in their infancy. 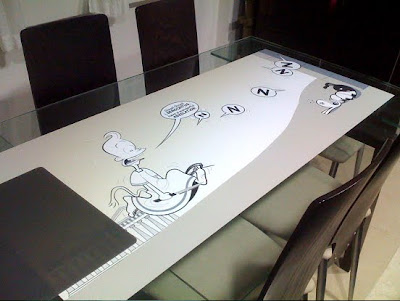 In my family home, I looked and looked at how the creation appeared on the walls and dining table. And that helped me see what areas of improvement are needed to move the designs forward. 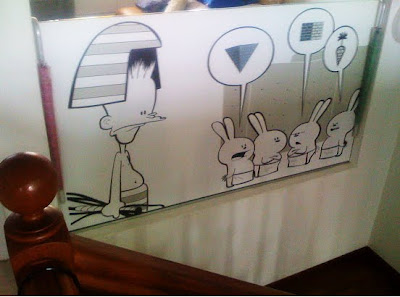 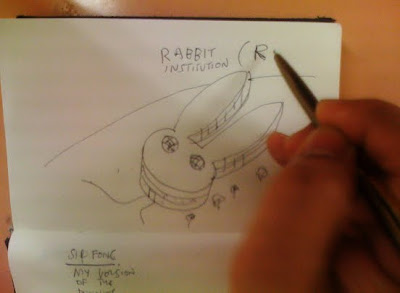 Friends also play important roles. As I shared with my good friend Miel about the name of Totto's school (Rabbit Institution), he immediately sketched out how the school compound might look like. 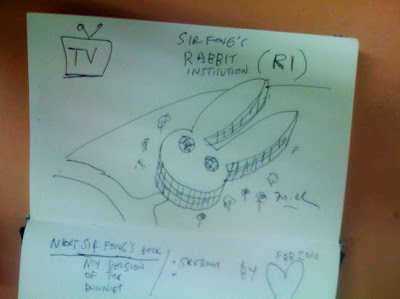 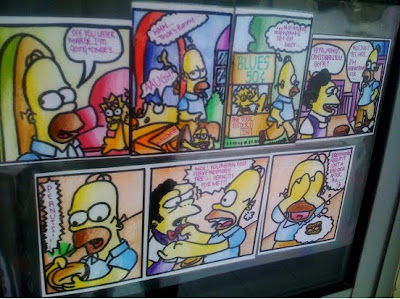 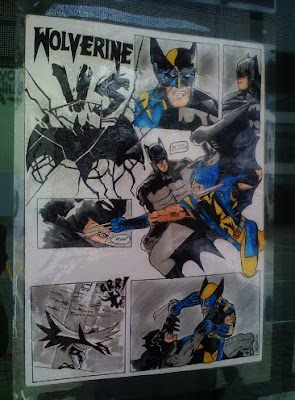 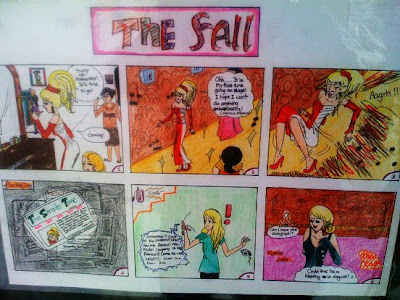 When I was teaching, being Form Teacher to a class was my favorite appointment.

At the beginning of each year, a form class was assigned to me: 30-plus amazing kids - each of them the greatest jewel in their parents' hearts - was entrusted to my care. Everytime I discovered a talent, a leader, a kind soul, a brilliant mind - I felt pride. Nothing compares to the joy of making a positive difference in a child's life. My students made me a better person.

So I was really touched when another form teacher shared about his class. It brought back vivid memories of the bond I made with my students.

So here's a valuable glimpse of one form teacher and his special class: Mr Elfie, and Class 1D of Shu Qun Secondary School, 2009: 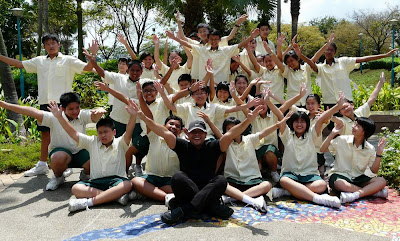 "If you are my student once, I am your teacher forever." 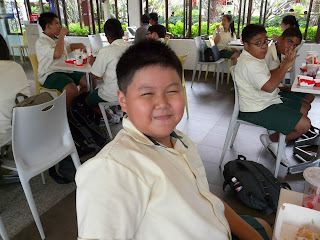 "Aiyoh . . . Joo Kian, wipe your mouth lah! Got something white white at the corner of your mouth!

And for goodness sake, straighten out your collar!" 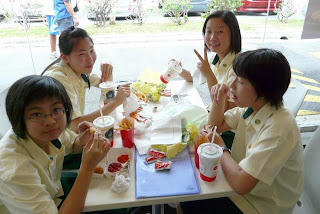 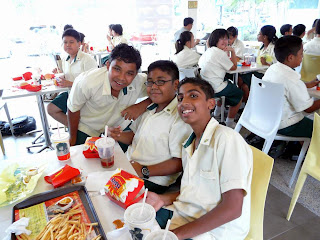 "Ranjan! Why you lean away from me? OK, smile everyone! Nice shot! Naizirul, Firdaus, very photogenic!

Joo Kian, you in the previous shot already! Kay-poh for what? And wipe your mouth!" 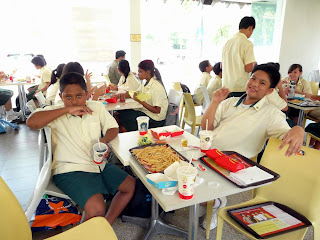 "Arfan (left) and Garda feeling frenched on a tray full of fries! BURP!"

And here's something Mr Elfie wants to say to his international students: 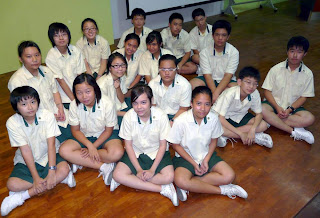 "Thirty seven students in this class of mine,

One last gem from the land of Mandalay.

Last twenty from the land of five stars and a moon,

These are my pearls, my strength, my baboons!"