Can a Singaporean comic artist break into a foreign market?

Last weekend, two Singaporean companies made their first foray into Malaysia together.
Doby Studio, headed by Gary Goh - with his now-famous Little White Dragon education comic series - joined Ottonium Comics to participate in Kuala Lumpur's annual Smart Kids Education Fair 2010.
Before a new comic brand breaks into the mass market, years of sound strategy preceeded it. To consumers, a Naruto or Pokemon seemed to come out of nowhere suddenly to make it big. To the creators, they'd already put in years of undying passion and hard work.
In the short video I made, you can see some of the hard work come to fruition. Gary and I had to deal with PR (public relations), HR (human resource) and business. There were light moments (us struggling to understand the GPS system) and valuable ones (my dad came along, and shared his experience of doing business in Malaysia when he was young).
The first obstacle we faced was traffic flow. For some reasons, traffic did not come to our alley! Once we identified the problem, we worked with the organisers of Expomal to set up our booth in a make-shift location. That made a big difference. It is also a testament to the organisers that they took immediate actions to assist newbies like us!
With that issue out of the way, I started to see, for the first time, the faces of my Malaysian customers. They came from all races, in all languages. Thank goodness for our good local friends who gave their weekends to help us! My KL friends were able to speak to parents in Cantonese and Malay, while I spoke to them in English and Mandarin. Gary Goh, ever the tireless crowd drawer, stood on a stool. Using his loudspeaker, he announced to passerbys our presence.
Because we were virtual unknowns in Malaysia and a majority of the parents have very young kids, sales were moderate but encouraging. I got a great sense of pride that some of my Sir Fong books are now in Malaysian homes. I have no doubt those who bought the books loved them!
I learnt a lot from the Fair: 1. with sincere and good partners, we can make changes on the spot to correct unforeseeable situations, 2. don't go anywhere without good friends and careful research, 3. don't give up when things seemed difficult. Stick it out to the end and the rewards will be totally unexpected and surprising. 4. Get your family behind you. They will lift you up so that you can focus on the essence of your business.
This is just the first step in Sir Fong going international, but it is a solid first step!
Posted by otto fong at 7:02 PM No comments:

Sir Fong will be joining Smart Kids '10 this coming weekend!
Smart Kids Educational Fair is the largest of its kind in Malaysia. This is it's 10th year.
I am looking forward to bringing my Sir Fong's Adventures to Kuala Lumpur parents. Of course the books are available in Kinokuniya KL, but I have not done any promotion overseas until now! This is my opportunity to interact with Malaysian parents and students, and learn what are the universal and the differences in Malaysian's attitude in Science education. Or education in general.
For Malaysian readers, I look forward to your support and interaction! 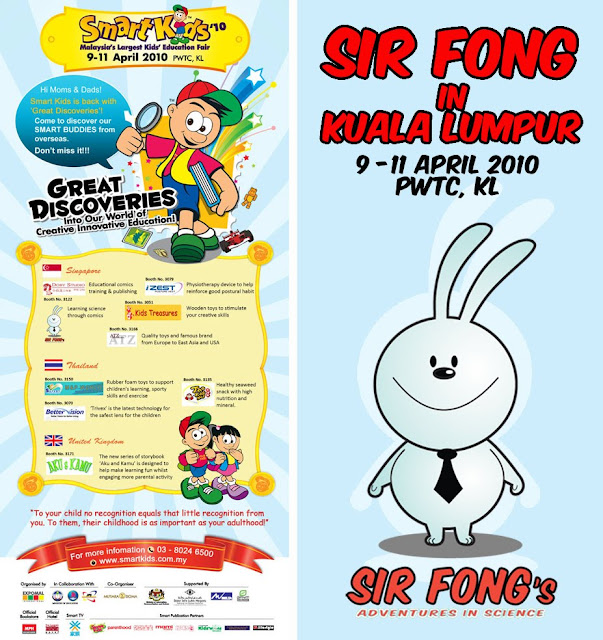 Today I want to talk about Singapore Popping.
Hong Kong has popped. Taiwan popped. Japan popped and South Korea just popped recently. What is "popping"?
Popping is when a country's songs, movies and books become really, really cool. When South Korea popped, everyone in Asia knows what is Samsung, the popular tv drama series "Jewel In The Palace" and of course, the pop song "Nobody But You"! That's popping!
Singapore hasn't popped. We may have a popular tv drama "The Little Nonya", and our own Stefanie Sun was pop princess in the Mandarin world for many years. Those are what I called "a good start". But Creative Technology is still a far cry from being a brand as big as Sony or Samsung.
But it is important that Singapore pops. A country can be prosperous, but if it is boring, it cannot attract others to visit. Foreign talents will not want to live in a cultural desert, and Singaporeans may migrate out of sheer boredom. Life is long - noone wants to be bored. 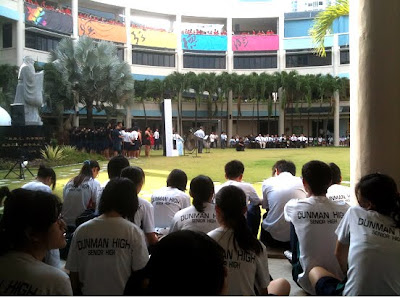 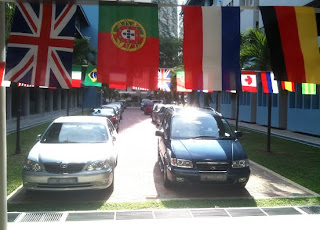 On April 1st, Dunman High held a day-long art appreciation event called "Kaleidoscope". Besides cultural performances, many artists are invited to conduct workshops for the students. The aim was to show them the beauty of diversity.
"Diversity" is a word that is often used, but how many of us appreciate the word at a deeper level?
In the workshop I conducted for Dunman students, I asked each student to draw a simple cartoon character. Then they must paste their character on the wall of a classroom (which normally looks like this:) 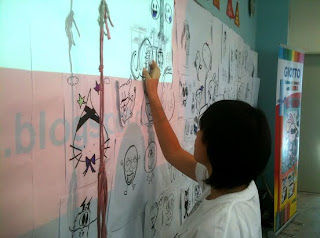 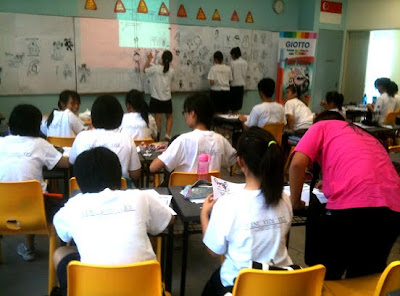 The students were enthusiatic! The cartoon characters were their self-expression! The diversity shown in the drawings was great! Yet, the students also saw that each one of them could not fill up an entire wall. It took everyone expressing themselves in all their own quirky, crazy ways to create a mini-masterpiece shown below:

Gorgeous, isn't it? One can stand and admire the many different characters in all four corners on this wall for quite a while! 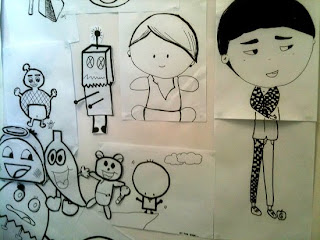 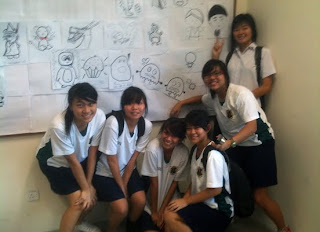 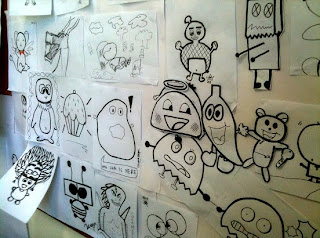 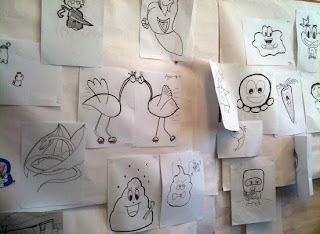 I feel that this is the key to Singapore "popping". We are a country full of diverse cultures, beliefs, and races. Each of us express ourselves differently. Yet, when we express ourselves, and also allow people different from us the space to express themselves, what we get is a rich, exciting tapestry that people can enjoy in many different ways. Our tapestry is not of just one single culture, one single race. Ours is that of a great variety and diversity. And that's what we have to offer to the world.
"Diversity" is the key to Singapore popping. The way to embrace diversity is to graciously allow space for different people to express themselves - not to claim that one culture, race or set of beliefs is better than any other. We give others the grace to be themselves, to express themselves, and it is also a grace we give ourselves to be ourselves and express ourselves.
That is the key to Singapore becoming an exciting destination for the world.
That is the key to bringing Singapore to the next level.
Embrace diversity. In a world that is growing closer and becoming more borderless, we can show the world how it's done. 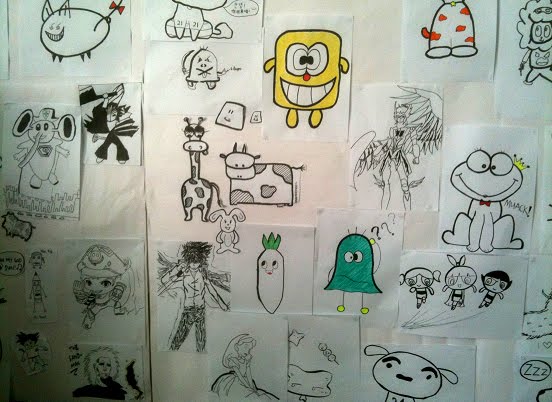