Dear friends and fans,
For Book 4, I sought help from two Singaporeans about the story. They agreed to be co-writers. This morning, we just had an incredible session brainstorming about Book 4. We fleshed out the characters of Sir Fong, Totto, Izak and Abby. We also worked on a storyline that excited all of us. 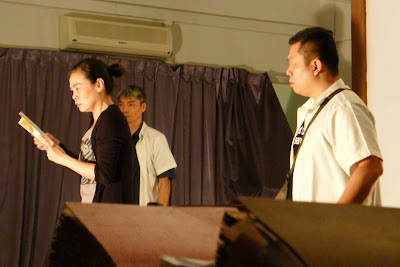 Above: a rehearsal scene from my Arts Festival 2011 play HERStory. Staged by Drama Box.
Earlier this year, I paused my comic work and devoted 6 months to write a play dedicated to my mother. The process of creating the play was thrilling, because I’d insisted on being as real as possible. My collaborators – Kok Heng Luen, Chong Tze Chien and Drama Box – and I met with some strong resistance in the creation of the play. This includes a forced change in the title of the play from “Black Peony” to “HERStory” (possibly due to concerns about my parents’ past political background), and a cold war between myself and my parents (who were upset that I would not remove the son’s personal background from the story). But I personally believe strongly about the purpose of writing the play, and the best approach to any piece of art is to be as honest as possible. Even after the play was staged, some people felt strongly that it was a good piece of art while others found reasons to hate it. Regardless, it was not a play one can ignore – in an Arts Festival where many shows struggled to fill up the venue, our play attracted near-full-house every performance.  The reviews from Straits Times were generally hostile and negative, while the reviews from Zaobao and the Flying Inkpot were highly favorable.

When I paused my comic works to do this play, I knew that it was worth the delay of my career as giving tribute to my mom is worth the sacrifice. I just didn’t know it would be so incredibly relevant to my comic works!
The experience taught me that a good piece of art will find its ardent supporters and face some strong dissent. Living that story was a roller coaster ride. Writing it was at times heart-stopping, and listening to the sobs amongst the audience, I believe we have presented something as real and as thrilling as we possibly could.
I’m applying this new-found insight into Sir Fong Book 4. My writers and I are digging into the universe created in Books 1 to 3, and also digging deeper into our intentions of creating the story. We aim not so much to please anyone, but rather to be as brutally honest to ourselves as possible. And rest assured, we never forget for a moment that Sir Fong is for you.
Yours always,
Otto
Posted by otto fong at 12:15 AM No comments: