Before I was drawing and publishing comics, I began my creative adventures as a playwright.
My first dramatic script, written for theatre, was titled "Another Tribe". It was the first Singapore Mandarin play to be given an R(A) rating [Restricted (Artistic)]. My second play, in English, was "Cetacea". After it was published, it won a Book Award. A third play, also in English, was called "We Are Family". It was restaged years later by a bunch of students in the school I taught. Finally, my fourth play "Mr Beng" played to full-house audiences in Victoria Theatre in Arts Fest 1999. It was restaged in year 2000.
By then, it was clear that my calling is Comics drawing. So I stopped writing plays, and started drawing and publishing. 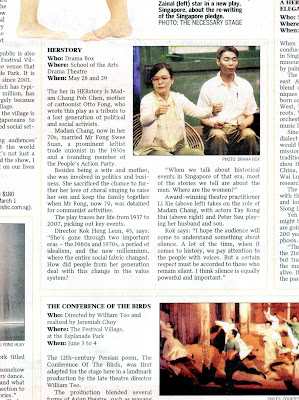 6 comic books later (5 of them are Sir Fong titles), I am writing a new play. It's original title was "Black Peony". I am writing it as a tribute to my mother. Later, the director Kok Heng Luen, a prominent veteran who also co-directed my first play "Another Tribe", and the cast reworked the story. We all wanted a story that speaks of a generation of women, not just my mom. Many of our mothers and sisters contributed to our country, but their stories were often overshadowed by the men's stories. Perhaps that's why "History" is unfairly "His-Story". So, the play's title is changed to "HerStory". 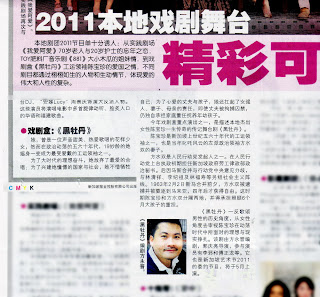 I am writing a play as a way of getting back to my creative roots. This process will also allow me time to think about Sir Fong's Adventures Book 4. I will begin the creation of Book 4 in June - hopefully it will thrill you readers in a whole new level!
In the meantime, "HerStory" will be part of Arts Fest 2011. It will play two days (28th and 29th May 2011), at the School Of The Arts Drama Theatre. I hope to see you there!
Posted by otto fong at 4:02 AM